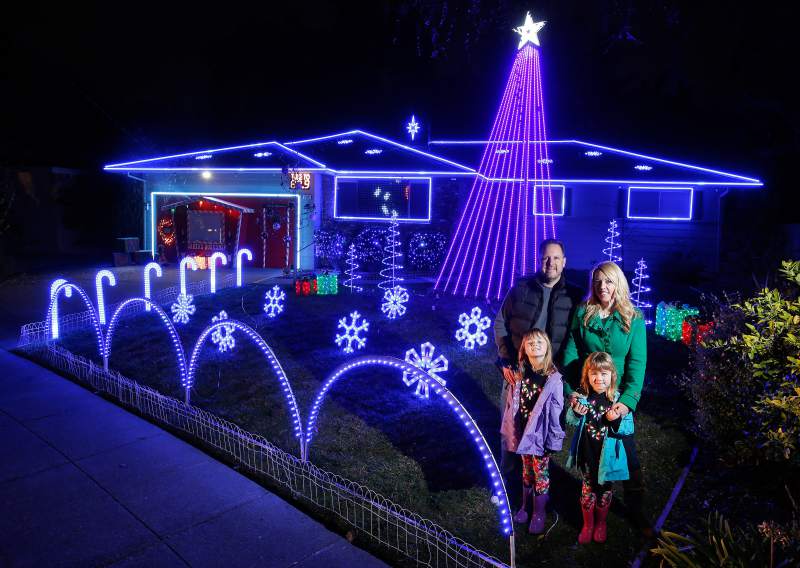 It’s snowed every night since Dec. 2 in Santa Rosa. You just have to know where to find it.

The Millers, a family of four who deck out their Vallejo Street home to the nines — heck, to the 10s — every year, have outdone themselves this year with the addition of a snow machine, and three-times the density of lights than in years past.

Theirs is one of dozens of Sonoma County homes elaborately festooned with seasonal lights and displays, turning yards into blazingly bright holiday tableaus.

The Millers’ home is not your typical set of holiday lights. Their home is uniquely high-tech, with an LED light show choreographed to a set of 13 songs that Nathan Miller, 41, has programmed himself. Each song takes 36 hours to program to the corresponding light show, he said, and each year the list of songs continues to grow.

“In the beginning, the little tiny idea I thought that was going to not take very much time turned into a big idea that took a lot of time,” said Nathan’s wife, Melissa, laughing.

The couple has two little girls: Sawyer, 7, and Sloane, 6. When Nathan Miller first started putting up lights back in 2012, the girls were just babies.

“Every year they get super excited about when the light show is going to start. … Now, we can go out there any night and run around in the snow.”

From the street, viewers can watch as Santa Claus, created purely from LED lights, dances along to “Uptown Funk.” Schroeder plays the piano throughout “Linus and Lucy” and during a medley of “Frozen” songs, Anna talks to Elsa through her bedroom door, trying to convince her to build a snowman.

While watching, viewers can tune into an unused radio station — 88.9 FM, to be specific — and listen to the playlist of songs with accompanying light show. Watchers are also prompted to text to a service Miller set up that displays text messages on a light board — after they’re run through a profanity filter. “Merry Christmas!” “Happy Holidays!” and messages of thanks and love frequently seen scroll across the side of the house, just to the right of Santa’s Workshop, where a video display shows a real person, dressed in a Santa suit, frantically moving about his workshop.

The display looks so realistic, the Millers’ dog, Wrigley, even barked at it.

But it’s not all just fun and reindeer games. The Millers are on a mission, too, to raise funds for Hearts for Happiness, a local charity started by Sierra Duarte, a sixth-grade teacher at Sequoia Elementary School.

The partnership with Hearts for Happiness, a group of elementary school students who focus on random acts of kindness — like handing out hearts on the street, placing flowers on cars windshields, and reading to people at nursing homes — began in 2015.

The idea to get involved with a charity came after strangers started leaving checks and cash for the Millers in their mailbox and against their door, often with notes explaining the money was to help with their utilities.

Since he first put the lights up on their Santa Rosa home in 2012, it’s gotten ever more elaborate. The show now has a steady stream of regulars.

One of them, Steve Breazeale, 43, was there Tuesday night with his 4-year-old daughter Jane. She wanted him to bring her to what she calls “the Nutcracker house” for the second night in a row.

Breazeale greeted Nathan with a warm handshake. The two have become friends after so many visits. Breazeale has donated to Hearts for Happiness, and is planning on creating his own elaborate light display. As for Nathan Miller, he’s already thinking about 2017.